The Kootenai are divided into two groups, the Lower Kootenai located closer to British Columbia on the lower waters of the Kutenai River, and the Upper Kootenai who settled on the Upper Kutenai River in Eastern Washington, Idaho, and Montana (Figure 11). Scholars have not found any satisfactory affiliation for the Kootenai language, which appears as an isolated language group. There have been some studies linking Kootenai to Algonquian languages from the east, or the Salish language groups in the northwest, but neither of these views have broad scholastic support (Campbell 2000; Turney-High 1958). The Kootenai likely originated further east on the Great Plains with a possible association with the Blackfeet; however, the Kootenai themselves have no migration stories that would support Plains origin (Turney-High 1958). The Kootenai are composed of several politically independent bands, with strong ties, yet minor variations in dialect between groups.

Although the Kootenai lack well established migration myths, it is generally believed that they originated farther to the east, and that the Upper Kootenai represent the oldest band. The Kutenai River was central to the Kootenai territory, and provided most of their subsistence needs. It is believed that the Lower Kootenai broke away far back in their history, settling further downstream along the Kutenai River. The line between the upper and Lower Kootenai appears to have been in the vicinity of the present-day town of Libby, Montana. For the Upper Kootenai, the Tobacco Plains, located on the border between Montana and Alberta, Canada was their cultural center, and it is suggested that this may be their first settlement in the region. Others within the tribe believe that the groups had divided before settling on the Kutenai River.

Kootenai interviewed during the early twentieth century suggested that there is a long knowledge of past conflicts with the Blackfeet, but most of the conflicts that took place after the 1800s appear to have been small (Malouf 1952). 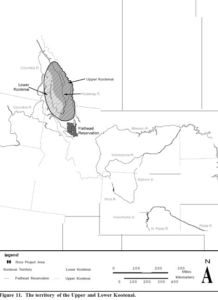 It is generally believed that these conflicts with the Blackfeet along with the spread of smallpox that drove the Kootenai from the Great Plains (Brunton 1998). From their traditional range within the Rocky Mountains, the Kootenai would make seasonal visits to the Plains to hunt buffalo (Brunton 1998). Taking advantage of a wide range of resources, including plains, mountains, and riverine resources, transportation was of particular necessity to the Kootenai. The Kootenai claim that they were among the first tribes in the region to have horses, having acquired them through trade with the Cree. Prior to the acquisition of the horse, dogs were the primary pack animal, although they were also trained for tracking game.

The Kootenai became more involved in the fur trade by the beginning of the nineteenth century. Because the Kootenai resided primarily in the mountain regions, access to bison required them to travel into Blackfoot territory, which frequently led to conflict (Brunton 1998). By the middle of the nineteenth century, several bands of the Upper Kootenai were living along the shores of Flathead Lake, where they took advantage of the available game and fish. This area was also used by the Salish and the Blackfoot, the latter using the area primarily to raid Salish and Kootenai—to steal horses and other goods. By 1845, French fur trappers and traders had begun to settle along Flathead Lake and, in 1855, the Kootenai signed a treaty with the U.S. to define set boundaries for their territory. Under the terms of the 1855 Treaty, Kootenai bands not willing to move north of the Canadian Border would be restricted to a reservation along Flathead Lake. This reservation would also include the Salish speaking tribes called the “Flathead” and the “Pend d’Oreille.” The Lower Kootenai living in Idaho and Canada were not part of these negotiations and were not included on the reservation. On the reservation, the three tribes remained relatively isolated from one another, particularly in the early years after the treaty.

Although the Kootenai ranged both on the plains and in the mountains, bison was their primary game, as it was among the Plains tribes settled farther to the east. Because their traditional lands did not extend far into the Plains region where the bison was abundant, the Kootenai frequently had to extend into territory controlled by their enemies. Because of this, on every hunt they ran the risk of conflict (typically with the Montana Salish or Blackfeet); therefore, the Kootenai tended to move in larger groups for protection. Their hunting style took advantage of their numbers, approaching the herd and attempting to divide a small number of bison away from the larger group. Hunting took place over a short span of several weeks during the summer, during which it was expected that hunters would bring back the entire winter food supply (Turney-High 1958). Some bison meat was eaten fresh, but most was dried for long term use. Meat was pulverized for better storage, or used to make pemmican.

Bison hunting necessitated the use of horses, both to catch and kill the game, and to bring the food back into the mountains. Records do not indicate how hunting was conducted prior to the acquisition of the horse, or if bison were then a focus. In addition to bison, the Kootenai made use of deer, elk and caribou, a variety of birds and other small game. After the arrival of Europeans, and under the influence of the fur trade, beaver became an important resource (Turney-High 1958).

One dramatic difference between the Kootenai and the Plains tribes living further east was the Kootenai’s use of aquatic resources. Fish, which was not a common staple among the Plains tribes, was an important part of the Kootenai diet, particularly among the Lower Kootenai living along the river. Fishing primarily made use of traps and weirs; although, fishing using lines were sued as well. The different resources available to the Upper and Lower Kootenai promoted trade and interaction between the bands (Turney-High 1958).

The Kootenai made use of a variety of game resources and gathered vegetable foods in their diet. Probably the most important root vegetable used by the Kootenai was the bitterroot, a starchy root gathered in the spring. Camas bulbs were also collected; although, this was more common among the lower Kootenai whose territory had a more abundant supply. In addition to these root vegetables, the Kootenai also made use of service berries, huckleberries, and choke cherries (Turney-High 1958).

Kootenai religion is centered around the search for and veneration of spirits. These spirits take the form of animals who are sought for guidance or for success in hunting or in war. Guardian spirits are acquired during adolescence, and the guardian is thought to be with the person through their life, deserting them at the time of their death. Tobacco was used as a means of exchange with spirits. The Kootenai believe that the spirits lost the ability to gather tobacco when the Native American peoples took over the land. The Kootenai therefore offer the tobacco to the spirits during ceremonies and the spirits look over the Kootenai. Many of the ceremonies and ritual practices were conducted by shamans, who were respected figures in the tribe that had a calling from the spirits. The Kootenai appear to have preferred younger shamans to older ones, as a shaman’s power was thought to fade over time (Turney-High 1958).

Most ceremonies and rituals performed by shamans were meant for communication with the spirits. One exception was the Sun Dance, a ceremony adopted from the Plains tribes, but practiced by both the Upper and Lower Kootenai. Other rituals, such as the Grizzly Dance and the Blue Jay Dance, were practiced, with the Blue Jay Dance being a more recent adoption that was not practiced before the nineteenth century (Turney-High 1933).

The Upper and Lower Kootenai represent the largest social division, largely separated by location along the Kootenai River. Most differences between the two groups are therefore related to divergent environmental resources. Within each of these divisions, the Kootenai settled in small bands, with each band having a winter village site on the river. Winter villages ranged from 150 to 200 people divided among 10 or more lodges. During the summer months, these villages would break into smaller familial units. Family groups were divided by individual households including grandparents, as well as married and unmarried children. The oldest male was considered the head of the household. Women were responsible for domestic tasks such as food preparation, preparing hides, child care, and gathering plant materials while the men were responsible for hunting and care of the horses. Marriage was informal as far as it lacked any specific ceremony; although, agreement or approval by the families was considered important. Polygyny was practiced, often with a husband marrying several sisters from one family.

Leadership in the winter villages fell to a single village leader, based on respect and prestige. The leader would manage day to day activities and appoint leaders for special band activities such as fishing leaders or travel leaders. The Kootenai themselves remember that this form of leadership was adopted after contact with Europeans and that leadership was more informal prior to that time.

Before the introduction of the Great Plains-style tipi, the Upper Kootenai built a version of the Plateau long house. The long house could hold 40 to50 people with at least three hearths positioned down the center of the floor. The base of the house was excavated one foot deep to provide firmer support for the poles.

Individual lodges were also constructed. These used lodge pole tripods connected by smaller poles covered in large mats of vegetable matter. Houses were arranged in a circle with the chief’s house in the center. Sweat lodges were also constructed, consisting of a circular frame of bent poles set into the ground with the interior of the structure excavated to about two feet deep. The frame structure was covered by sod and grass until canvas became available through trade with Europeans.

Knowledge of the range and territory of the Kootenai prior to the eighteenth century is not well known; although, it is generally believed that the Kootenai originated farther north in what is now Canada. By the nineteenth century, they had migrated farther into the Rocky Mountains, with access to a portion of the Plains in northern Montana, in Blackfoot territory. It is not clear in the literature that they ranged as far as the Little Missouri River or Black Hills country of northeastern Wyoming. 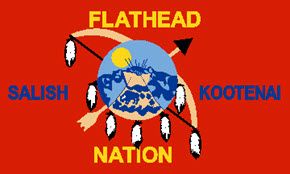