Similar to other eastern and Great Lakes Tribes that began to migrate westward following the arrival of Europeans, the Cree speak dialects of the Algonquian language group, similar to the languages spoken by the Ojibwa, Fox, and Menominee. Variations and dialects within the Cree language show greater diversity between the eastern and western groups suggesting that they may have had little contact, while migration north to south, likely seasonally, resulted in greater similarities in dialects between northern and southern bands of Cree (Darnell 2001).

It is believed that the Cree originated near Lake Winnipeg in southern Manitoba, moving westward due to population pressures in the east, and involvement in the fur trade. Analysis of the diversity in the eastern and western Cree languages suggests that some of the Cree began migrating westward well before the arrival of Europeans, moving to northwest Manitoba by the tenth century and farther west along the Saskatchewan River as early as the fifteenth century (Figure 7). Interactions with European fur traders in the eighteenth and nineteenth centuries, starting with the French, and later with the British, occurred with the continued westward migration of the Cree and the expansion of their territory further south, where they began interacting with the tribes settled along the Missouri River (Darnell 2001).

The Cree set themselves up as intermediaries between the Plains tribes and European traders. They allied themselves with the Assiniboine against the Blackfeet and took control of meetings with Europeans and, along with this, gained access to firearms. Still spending part of their year away from the Plains, in woodland environments, the Cree were less reliant on European horses of the buffalo trade during the seventeenth century, heading south to the Plains only during the winter to hunt and trade. By the end of the eighteenth century the disruption of the traditional Cree trade networks limited access to horses and broke their once strong hold on European trade. The disruption of the trade network resulted in more conflicts between tribes in the region, resulting in the Cree allying with the Flathead, Hidatsa, and Mandan. In addition to trade goods, interactions with Europeans during this period also brought a host of diseases that ravaged the Cree, wiping out half their population by 1838. Although many of the Plains tribes had greater numbers killed by disease, the decrease in population along with the decline in buffalo changed many of the traditional Cree settlement and hunting patterns. By 1845, the Cree had mostly migrated away from their former woodland territory and adapted to settlement on the Plains (Darnell 2001). 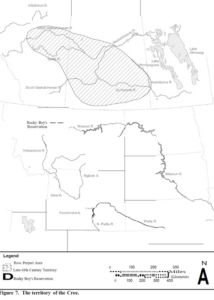 Between 1850 and 1880, the buffalo were all but gone from the Plains. The decline in the buffalo herds affected the territories of some tribes more than others, leading to more raids and conflicts between groups. The Cree maintained their strong trade networks with Europeans, and turned to the Hudson’s Bay Company when conflicts with the Blackfeet escalated. A treaty with the British in 1876 provided financial support but confined the Cree to Reservations. At their maximum extent, the Plains Cree ranged from Manitoba through Saskatchewan to the foothills of the Rocky Mountains in Alberta. They had little contact with the Wood Cree located further to the north.

Until the mid-nineteenth century, the Cree made seasonal use of both woodland and plains resources. By the mid-nineteenth century buffalo had become the dominant game for the Cree, which they hunted using the “chute and pound” method, which employed angled chutes made of brush to funnel game into constructed or natural enclosures which trapped the buffalo. The buffalo would then be killed using spears or arrows. Buffalo meat could be preserved in the form of pemmican, which combined meat with berries and melted fat. The Plains Cree supplemented their diet with fish caught using weirs or killed with spears. Local plant resources included grassberry (Indian turnip) and various berries (Darnell 2001).

The Plains Cree believed in the Great Spirit and creator of the universe, kice-manito-w. Other spirit powers existed as intermediaries between the Cree and the Great Spirit. The most important ceremony in the Cree religion was the Sun Dance which was thought to bring long life to the Maker and to bring rain for the people. The Sun Dance, conducted annually, also provided an opportunity for social interaction as groups would assemble for the ceremony. Another significant ritual was the “smoking tipi,” which was held in the spring and involved fulfilling a pledge to the spirits through singing. Common ceremonial elements in the Cree religion included smoking a pipe, material offerings to spirit powers, songs, prayer, purification through a smudge or sweat bath, and the use of medicine bundles (Darnell 2001).

The basic unit within the tribe was the band, comprised of related kin. Bands exhibited a great deal of fluidity with members and families switching between them. Although movement between bands was not uncommon, parents often wanted children to marry within the band. Prestige, in the form of hunting ability, wealth, or a strong war record, formed common criteria for the band chief. The role was largely based on earned respect, and was not considered hereditary. A band could have more than one chief at a time, and would often have a war chief and a peace chief (Darnell 2001).

The leading men of the band would form the council, which provided counsel to the chief, who would ultimately make decisions; the word would be spread through the band by a crier. The warriors were selected by the elder men and each band’s warriors had their own songs, dances, and insignia. The warriors and young men of the band would attain prestige through their prowess, and by disassociating themselves from material possessions (Darnell 2001).

Burials usually involved interment with the head facing north, or sometimes tree burial during winter months. Grave goods, usually in the form of tobacco or grease, were placed on the surface of burials (Darnell 2001).

The Plains Cree made use of a three pole tipi, similar to the Sioux, the Cheyenne and the Kiowa, and which varied in size. The Cree used smaller tipis during the summer months when the tribe was separated into familial band, building larger tipis when bands would congregate during the winter months (Lowie 1954). Sweat baths usually consisted of smaller poles bent in an arch over a center post that was used to hang offerings (Darnell 2001). Other ceremonial structures, such as the Sun Dance Lodge were built using a number of lodge poles lashed together supporting hide, or later canvas coverings. Clothing made of deer hide and buffalo robes was often decorated with beads and embroidery. Cree beadwork unlike their lodge construction, more closely resembled western Great Plains groups such as the Crow and Flathead (Darnell 2001; Lowie 1954).

Before the loss of the bison, subsistence relied primarily on big game hunting, driving game into natural enclosures using brush lined drives and chutes. In the late nineteenth century, the reduction of bison herds across the Plains had encouraged the Cree to supplement their diet with fishing. The Cree built weirs across fast moving water, consisting of a series of sticks set into the water to restrict the passage of fish and enclose it in pools where they could be easily killed (Darnell 2001).

While the traditional range of the Cree lies to the north of the Project area, in northern Montana and southern Saskatchewan and Alberta, by the middle of the eighteenth century, bands of Cree living in Saskatchewan had started to migrate farther south into the Great Plains. Trade with the Assiniboine and conflicts with the Blackfeet may have led the Cree to settle further south along the Rocky Mountains into southern Montana and Wyoming. In the latter part of the nineteenth century, pressure from the Blackfeet and the decline of the buffalo herds led the Plains Cree to withdraw further to the north (Darnell 2001). 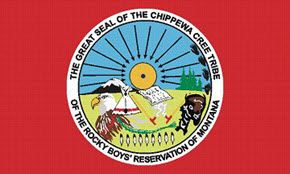