The Cheyenne speak an Algonquian language that is related to languages of the Arapaho, Blackfoot, Cree, Gros Ventre, and the Ojibwa. Prior to the adoption of the horse, the Cheyenne lived a semi-sedentary life, inhabiting the “mosaic of woodland, prairie, and plains habitats” of modern day Minnesota west of the Great Lakes (Moore et al. 2001). Both the Cheyenne and the Arapaho migrated out of this northern Midwestern territory and both were prominently situated in South Dakota and eastern Wyoming by the late eighteenth century and early nineteenth centuries (Debo 1970). Access to horses and trade opportunities coupled with pressure from other Plains tribes forced the Cheyenne and the Arapaho to move southward into present-day South Dakota and Wyoming (Moore et al. 2001). While the two tribes speak similar languages, they differ in culture and are considered two culturally distinct tribes.

The Cheyenne were first recorded by Western observers in 1673, inhabiting the present-day western Wisconsin and Minnesota between the Mississippi, Minnesota, and Upper Red Rivers (Lowie 1954) (Figure 6). A woodland tribe, the group in fact consisted of a fluid confederation of bands that later united in the late eighteenth century. Prior to acquiring the horse, the Cheyenne lived a sedentary lifestyle in this region and occasionally traveled by foot for hunting purposes on to the Plains (Moore et al. 2001). They are thought to have moved westward gradually and adopted the equestrian lifestyle during this time. The Cheyenne are believed to have occupied the North Platte River region of Wyoming by 1800 (Svingen 1993) and engaged in frequent struggle with other Plains tribes over hunting territory and access to the Black Hills region. These battles are thought to have contributed to their westward migration and their alliance with the Arapaho. Consequently, the Cheyenne and the Arapaho both began to move southward onto the Central Plains in South Dakota and Eastern Wyoming where trade was readily accessible (Moore et al. 2001). When these alliances failed to attain territory from Plains groups occupying this region, the Cheyenne and Arapaho began to move southward and westward where they continued to encounter the Kiowa and Kiowa-Apache, and also the Comanche. 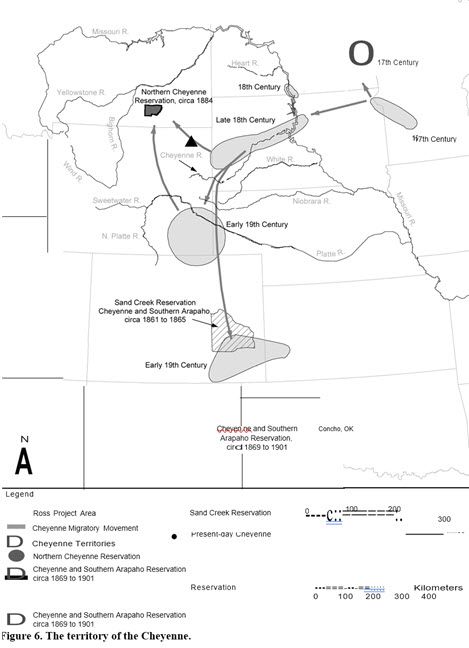 The Northern Cheyenne are very protective of land tracts along Otter Creek and Owl Creek in Montana, and consider both areas sacred. The Otter Creek land tract is said to have contained 46 home sites where the Birney people once lived (Northern Cheyenne Tribe 2002; Deaver 1988). This land tract was given up as part of the Tongue River Reservation establishment that occurred in 1899. The Owl Creek land tract, which is said to have cultural and religious significance for the Cheyenne. Early Indian agents expected the Cheyenne to take up farming in Montana but this attempt was unsuccessful due to the land being unsuitable for agriculture (Campbell 1987).

Prior to reservation times, the Cheyenne used seasonal bison hunting as their primary food source, augmented with the gathering of a variety of plant foods and horticulture. They are known to have cultivated tobacco as late as 1802 (Lowie 1954). Seasonal hunting that occurred in the summer and sometimes in the fall was conducted in groups by men’s societies. At other times, when bands were broken into smaller groups, individuals hunted alone. Other big game hunted by the Cheyenne consisted of deer, elk, wild sheep, and pronghorn. Smaller game, such as wolves, coyotes, bears, beavers, and otters, were hunted for food and fur. The Cheyenne supplemented their diet with native plants including roots and tubers such as breadroot, Jerusalem artichokes, and Indian potatoes (Grinnell 1923). Seasonal fruits and berries, such as buffalo berries, elderberries, and chokecherries also were gathered (Moore 1996). Horticulture, which was abandoned largely by the time horses were acquired, included crops such as corn, beans, and squash (Moore 1996). After the acquisition of the horse and the transition to a fully nomadic lifestyle, buffalo hunting became the primary subsistence strategy of the Cheyenne, who traded closely with the Arikara, exchanging buffalo meat and hides for the horticulturalist’s corn and crop goods (Lowie 1954). Buffalo was hunted, always by men, in two ways: communally by the men’s societies in the early summer and late fall, and individually or in small groups when the tribe had disbanded throughout the remainder of the year (Moore et al. 2001). Horses also provided the opportunity for the Cheyenne to raid for more horses, livestock, and other goods. By 1830 the Cheyenne had maneuvered themselves into position as the primary trading group in the Great Plains with horses used as the primary currency to procure and move other goods.

Connection with the natural world and their immediate environment was vitally important to the Cheyenne. The basis of Cheyenne cosmology was the conception of the world above and below, separated by the surface of the earth. The horizon, where the two worlds met, was separated by the four cardinal directions, each inhabited by specific spirits and symbolized by specific colors and animals (Moore et al. 2001). It was expected that tribal members should live in harmony with and treat the land with respect. Part of showing respect for the earth meant causing no unnecessary disturbance of the ground. Medicine men and women assisted others in maintaining this respectful relationship through a numerous ceremonies and vision quests (Weist 1984:39).

Ceremonies provided an important way for the Cheyenne to maintain their sacred connection to nature, with four major ceremonies delineating their religious cycle. These included the Sacred Arrow Renewal, the Sun Dance (also called the Medicine Lodge), the Massaum (also called the Animal Dance), and the Sacred Hat Ceremony. The Sun Dance, which was geographically associated with the sacred lands of the Black Hills and northeastern Wyoming (Dodge 1882; Hanson and Moor 1999; Sundstrom 1996), was a means of renewing “the barren earth” and was a performance that reconstructed the world and nature. Seeking spiritual visions was a key element in the Cheyenne Sun Dance (Harrod 1997:146-147). Of the other three major ceremonies that were performed, the most important was the Sacred Arrow Renewal Ceremony, where Sweet Medicine was received during the supernatural instruction at Noahvose, the Sacred Mountain (also known as Bear Butte) in South Dakota (Moore et al. 2001) and is considered the center of the Cheyenne universe (Monnett 2001:13). The Sacred Arrow Renewal Ceremony consisted of two war arrows and two hunting arrows that were cleansed and revitalized. It was necessary to cleanse the Sacred Arrows periodically, especially after intertribal violence had occurred. Failure to renew the Sacred Arrows could have risked the welfare of the entire tribe, as polluted arrows caused poor hunts and drove big game away (Moore et al. 2001). Although the Sacred Arrows Renewal ceremony is usually associated with the continuation of successful hunts, the ceremony also was a source of moral regeneration for the Cheyenne universe, reaffirmed the social bonds between all Cheyenne, and promoted a stronger sense of group solidarity (Harrod 1997:94-107). The origin of the Sacred Arrow is said to be Devils Tower, in present-day northeastern Wyoming (Looking Horse 1987).

Seasonal cycles found many Cheyenne in small bands that each had a chief. These smaller residential bands, generally numbering ten and possessing a customary wintering place along a river, were comprised of several hundred related individuals that were further defined by matrilocal extended kin networks. These bands became larger groups that made up men’s societies and a council of the local chiefs. Ten major divisions of the Cheyenne bands existed throughout most of the year. Four representatives were sent to summer meetings as well as four “old man chiefs” who served for 10 years, after which another “old man chief” was selected as his replacement. The “old man chiefs” worked closely with men’s societies to carry out the recommendations of the Council of 44, a governing body of peace chiefs distinct from war chiefs (Moore et al. 2001). Ultimately, all the bands were subject to the decision making of a single tribal council (Lowie 1954).

Warrior societies also played an important role in Cheyenne society. Cheyenne tribes were organized into six men’s societies, which were divided among the 10 bands. They acted as lifelong fraternities that had their own songs, dances, and regalia. Originally, men’s societies were warrior societies but became associated with governing the Cheyenne tribe over time (Petersen 1964). When a young man came of age, he joined his father’s society. Women’s societies were not based on kinship, but focused on craft production used in trade or at campsites. For example, the Quilling Society, devoted to crafting with porcupine quills, was a highly regarded society for women (Moore et al. 2001).

The Cheyenne are considered to be bilateral, where terms of kinship are extended from a father to his brothers and the term for mother is extended to her sisters. This type of kinship system is referred to as bifurcate merging (Eggan 1955; Grinnell 1923; Moore 1987).

The Cheyenne utilized a limited number of ceramic items that were constructed for subsistence and for play. For instance, the Cheyenne produced an assortment of furnishings for their tipis. Items such as pipes, saddles, bridles, lariats, and travois were constructed for daily secular and sacred purposes. Smoking pipes were made from both bone and stone (usually red catlinite) (Moore et al. 2001); awls and scrapers were often made of bone or antler and used for sewing buffalo hides into clothing and tipi covers (Hoebel 1960). Cultural items such as baskets, small plum stones, netted wheels, balls, dolls, sleds and tops also were produced (Moore et al. 2001).

The Cheyenne constructed their tipis with a three-pole base with a cover that was sewn together with up to 21 bison hides. The interior of the tipi was lined with decorated skins and contained rush or willow backrests, mattresses, bedding and storage containers (Moore et al. 2001). Long and narrow tipi flaps created a long smoke hole that was a characteristic attributed to the Cheyenne (Campbell 1927). Cheyenne camps were located typically near waterways or other water sources (Grinnell 1918). They differed from other groups in the region because they developed and utilized a special tanning process that whitened their bison hides. As a result, Cheyenne tipis and campsites were easily identifiable since other Plains tribes did not use white skins on their tipis (Moore 1996:33-35).

Sweat lodges were made with tree branches and covered with sod and were used for purification and cleansing purposes. Participants dug a ceremonial hole and filled it with hot coals (Grinnell 1919). Ceremonies that used sweat lodges were used throughout the Northern Plains and were common for the Cheyenne.

The Cheyenne are known to have been active in Nebraska and eastern South Dakota as well as in western Wyoming. During their alliance with the Arapaho, the Cheyenne moved into Central Plains in South Dakota and Eastern Wyoming. The extended area of the Black Hills and northeastern Wyoming west of Devils Tower were identified historically as sacred hunting grounds of the Cheyenne, who used hunting not only for subsistence but as important ceremonial activities that helped define their identity as a people and tie them to the land (Blackmore 1869; Sundstrom 1996). While the buffalo was the most important resource, the Cheyenne and other Native American groups used this area for sacred hunting activities related to pronghorn procurement (Sundstrom 2000). As discussed above, northeastern Wyoming was also an important location for band gatherings and ceremonies such as the Sun Dance and Sacred Arrow Renewal Ceremony (Chicago Tribune 1875; Dodge 1882; Hanson and Moor 1999; Looking Horse 1987; Niehardt 1953).